Two years ago it seemed like the Kansas City Chiefs would be dominating the AFC playoff scene for the next decade. They have the flashy young quarterback in Patrick Mahomes and the speedy skill of Tyreek Hill and the surest hands on a tight end in this league in Travis Kelce. Fast forward to last year when an upstart young Cincinnati Bengal team led by LSU legend Joe Burrow eliminated the Chiefs in the AFC Championship game.

What followed was an interesting offseason for the Chiefs. Contract negotiations broke down between Kansas City and Hill, and the wide receiver was shipped off to Miami for draft picks. Taking his place are free agent veterans Marquise Valdez-Scantling and Juju Smith-Schuster, as well as incumbent Mecole Hardman and highly touted rookie draft pick Skyy Moore out of Western Michigan. While none of these receivers are as explosive as Hill, look for either MVS or Hardman to fill that deep receiver role for Mahomes.

Another interesting signing on offense is long-time Tampa Bay running back Ronald Jones. Neither Jerick McKinnon or Clyde Edwards-Helaire have proven they can stay healthy for a whole season, so Jones should come in immediately to take some of that early down work. It gives an interesting dynamic to a Chiefs offense that hasn’t had a physical running back since Kareem Hunt. 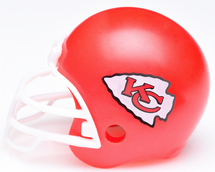 The Chiefs find themselves somewhat depleted on defense after honey badger Tyrann Mathieu signed with the Saints and rookie George Karlaftis projected to be starting on the defensive line. Karlaftis is a stud but his draft stock fell considerably ahead of the draft and some believe the Purdue star could struggle at the NFL level. Kansas City does return Frank Clark and Chris Jones on the defensive line and L’Jarius Sneed in the backfield, but there are still some holes that are glaring in this Chiefs lineup.

So what do we make of Kansas City this year? The division got a lot tougher with Davante Adams in Las Vegas, Khalil Mack in Los Angeles, and Russell Wilson in Denver. Winning the AFC West is no sure thing for the Chiefs this year, and with the AFC stacked from top to bottom, even a Wildcard spot could be difficult to secure.

As with most, I’m expecting a step back from the Chiefs. Unless they’re able to rework their offense, I can see them being more of a running team with Ronald Jones and the committee in the backfield. Expect Kelce and Juju to work the middle of the field, but I’m not looking for major explosive plays on every down like they could do with Hill. On defense, they’re playing three of the better offenses in the conference now and I really don’t know if the Chiefs have an answer for Adams or Wilson. The AFC West is going to be a dog fight this year, and don’t be surprised if the Chiefs find themselves on the outside looking in later in the year.