Can the 49ers Overcome All the Offseason Controversy

The offseason for the San Francisco 49ers was shrouded in off-field drama as star wide receiver Deebo Samuel threatened to hold out for a trade. The trend follows in the footsteps of former Kansas City Chiefs wide receiver Tyreek Hill, who forced his way to Miami in order to sign a historic contract. The 49ers haven’t budged, and Deebo has reluctantly re-joined the team for now. There have been rumors that the two sides are working towards a major deal, but the 49ers have had a recent strategy of paying up for defense and using interchangeable parts on offense.

But that wasn’t even the biggest story. The major headline heading into the season is who will be starting at quarterback. The 49ers seem like they are leaning towards second-year and third-overall draft pick Trey Lance to start under center, but veteran Jimmy Garopollo is still on the roster and has yet to be traded. Some believe a trade is in the works, but some also believe that the 49ers are keeping Garopollo in case Lance struggles early in the season.

A majority of the offense is back this year, led by Samuel and George Kittle. Brandon Aiyuk is hoping to have a strong camp and get off to a good start. Last season, Aiyuk was in the doghouse after a bad camp and failed to be a major part of the offense until late in the season. Jauan Jennings is slotted in as the third receiver right now, but the 49ers have been linked to a couple of free agents including veteran receiver Julio Jones. 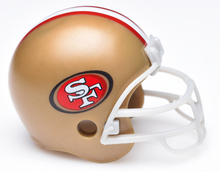 The backfield is always a fun conversation in the bay area. The incumbent appears to be last year’s breakout start Elijah Mitchell. Behind him are returning backs Trey Sermon, JaMycal Hasty, and Jeff Wilson Jr., although third round draft pick out of LSU Tyrion Davis-Price is turning some heads early.  Once again it looks like a committee is forming in San Francisco to lead one of the best running games in the NFL.

On defense, most of the starters are back, particularly on the defensive line. The 49ers parted ways with Dee Ford, but will hopefully be welcoming back a healthy Javon Kinlaw who has battled knee injuries throughout his young career. Once again it is a deep group of defenders that has produced one of the stingiest defenses in the league the past few years. Nick Bosa and Arik Armstead are the keys to the defensive line, but one of the true leaders is linebacker Fred Warner who leads an aggressive and hard-tackling linebacker group.

So where do the 49ers fit in the NFC rankings? With Lance under center it’s hard to put them up against the Rams, and even the Cardinals could see a resurgence this season with a healthy Kyler Murray. Until we see Lance in action, it’s hard to really determine how this team will do. If he plays well, the ceiling is the Super Bowl. If he struggles, it could be a long season for Kyle Shanahan and company.

Currently MyBookie has a 50% Welcome Bonus up to $1000 with first deposit. Get ready for NFL Football and Visit Mybookie. NFL regular season begins September 8th 2022.