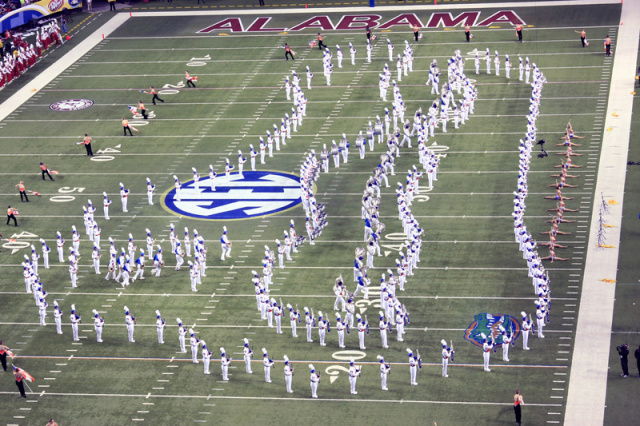 There is one game left on the 2021 college football season schedule, and that is the National Championship Game presented by AT&T on Monday, January 10th, between the Georgia Bulldogs and the defending champion Alabama Crimson Tide. The game will be held at Lucas Oil Stadium, home of the NFL's Indianapolis Colts. Georgia enters the game as a 2-point favorite, despite having just lost to Alabama a month ago in the SEC Championship game. Georgia was a 6-point favorite in that game, but ended up suffering their first loss of the season 41-24. Alabama was clearly the best team last year, but this year they didn't look like they would even be a playoff team for a while. They beat #11 Florida by 2 points, lost to un-ranked Texas A&M, and then needed 4 overtimes to beat un-ranked Auburn 24-22. In that game, they didn't score their first points until the 4th quarter, and tied the game with their first touchdown with just 24 seconds left on the clock. But after that, they beat #1 Georgia 41-24, and undefeated Cincinnati 27-6 last week (handing both teams their first loss of the year) in the Cotton Bowl playoff game, so here we are with an SEC Championship re-match, but this time for the National Championship. As of January 6th MyBookie Sportsbook has the Bulldogs at -130 money line, and the Crimson Tide are +110 The over/ under is at 52 points. This is a tough one to call. Georgia was clearly the dominant team all year until that loss to Alabama last month. They are coming off a big 34-11 victory over Michigan in the playoff Orange Bowl last week. It is hard to bet against Alabama coach Nick Saban; he's been in every championship game going back to 2015- except for 2019. But his pattern since 2015 in championship games has been win, loss, win, loss, win, so maybe it's time for another loss. I think it is. Despite playing great the past month, and coming together when it counts, Georgia is just a better team. Alabama did beat them recently, which makes me think even more it will be difficult to beat them again. Georgia has something to prove, and I think the Bulldogs win by more than the 2-point spread.